Cristiano Ronaldo is set to return to Manchester United 12 years after leaving, but what kind of player are the Premier League side getting back?

And while he is, at 36, clearly past his peak, the stats show he is still one of Europe’s top goalscorers.

So how do late-period Ronaldo’s stats hold up compared to his earlier ones? 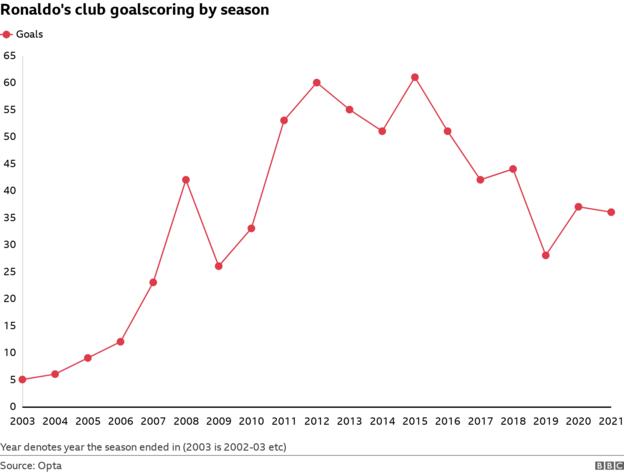 Ronaldo’s goal figures have dipped somewhat since he hit over 40 La Liga goals for Real Madrid in three out of five seasons. In 2014-15 he hit 61 goals in 54 games in all competitions.

But while his time at Juventus will not be deemed a success by his standards, he still managed an impressive 101 goals in 134 games in all competitions.

By contrast a younger Ronaldo scored 118 goals in 292 appearances in six seasons at United.

In fact since Ronaldo joined Juventus in 2018, only Robert Lewandowski (99) and Lionel Messi (91) have scored more goals in Europe’s top five leagues than his 81.

That is more goals than Harry Kane, Erling Braut Haaland, Kylian Mbappe and the rest.

His Champions League scoring did tail off at Juventus though. He had hit double figures in each of his last seven seasons at Real, but only managed six, four and four in three years at Juve.

How Cristiano Ronaldo’s goalscoring has changed by season (five in 2002-03, 61 in 2014-15 and 36 last season)
The trophies…
Ronaldo is the joint second most decorated European Cup/Champions League player ever with five wins – four at Real Madrid after one at Manchester United.

He has also won the Ballon d’Or – for the best player in the world – four more times since he first won it at United.

In the 11 years since leaving United, he has ‘only’ managed four league titles (two in Spain and two in Italy), and if his failure to win a Champions League with Juventus means his time there will be seen as a let-down, there has been no notable dip in the amount of trophies he has won at club level during his career.

In six years at Manchester United he averaged more than a trophy a season – seven major ones in six years (including three Premier League titles in a row) and three minor ones.

In nine years at Real Madrid, it was eight major competitions and eight minor ones.

And he won three major trophies and two smaller ones in three years at Juventus – although their nine-year reign as champions was ended last season by Inter Milan.

We have defined minor trophies as ones you qualify for by winning a trophy (eg Community Shield, Super Cups, Fifa Club World Cup).

The assists…
Ronaldo’s game has always been more associated with goals than assists – although he did actually set up a lot of goals in La Liga (87 assists in nine seasons).

But in recent years, as he has become more of a number nine, those assists have dried up slightly. His past five seasons – two at Real and three at Juventus – have seen an average of 5.4 league assists.

That is comparable to his six seasons at United in the Premier League (5.67 assists a season).

He got stronger and developed into more of a goal threat before becoming a generation-defining goalscorer at Real Madrid.

He was still involved in plenty of dribbling and passing in his first few years at Real but eventually became more of a centre forward who was not involved in build-up play so much.

That change continued during his three seasons at Juventus.

Most notably his dribbles are down from 10.9 per 90 minutes in the league during his second season with United to about 5-6 during his peak Real years – and now 3.1 in each of his past three seasons in Serie A.

Ronaldo is taking fewer shots too (5.4 per 90 minutes last season – compared with 7.8 at his peak) – but still comparable to his United years.

Graphic showing how Ronaldo’s shots, assists and passes per 90 minutes have risen and dipped
How many minutes in the legs?
While Ronaldo does not play every single game any more, he has still managed more in the league than you might expect in recent years.

He played 33 times in Serie A in each of the past two years, featuring in 85% of Juventus’ league games in his time at Italy.

In fact the 2,803 league minutes he managed last season was more than in any of his six seasons at United.