Thousands of spider crabs have been spotted in a mass gathering off the coast of Cornwall.

The aggregation of male crabs was filmed in knee-deep water, a few metres from a Falmouth beach at low tide.

The annual spectacle happens because the crabs rally together to protect themselves while moulting.

Matt Slater, from Cornwall Wildlife Trust, said: “Looking down at the mass of crabs scuttling on the seabed was a truly incredible experience.”

Mass aggregations happen between late summer and early autumn when the crabs crack open their exoskeletons and grow a new outer shell, the charity said.

Mr Slater, the charity’s conservation officer, said: “Our seas are full of surprises – most locals would have no idea that one of the world’s great wildlife aggregations is occurring not too far from where they sleep.

“It goes to show how important our Cornish seas are and why we all need to look after them better.” 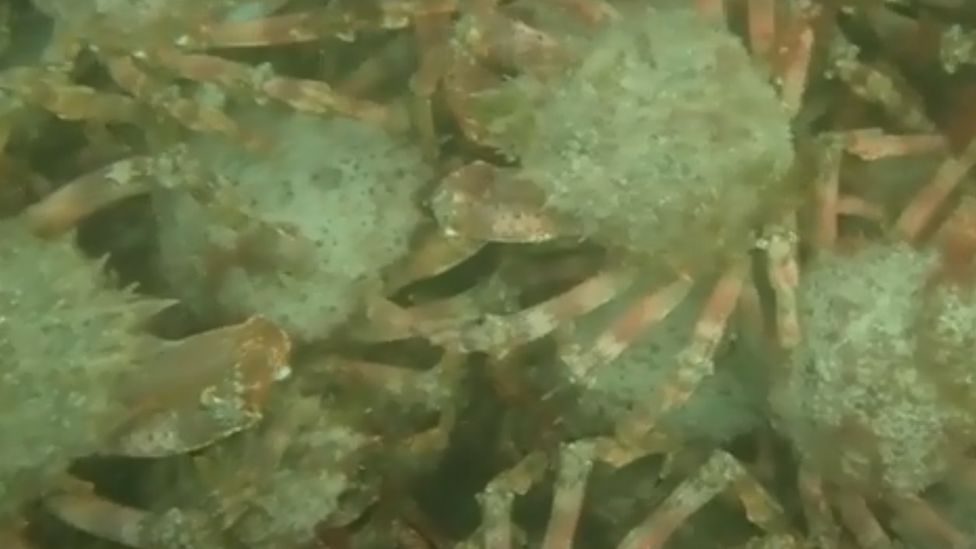 image captionThe spider crabs gather because they are vulnerable while they are moulting
Spider crabs are a common species in Cornish waters and have long spiny legs and claws.

Cornwall Wildlife Trust, one of 46 wildlife trusts in the UK, said the species had thrived in recent years due to climate change and warming sea temperatures.

The charity is asking members of the public to record any spider crab sightings via its app or online.

Mr Slater added: “We hope this mass sighting is a sign that spider crab populations are healthy.

“We would love to know if there are more aggregations like this forming around the coast or if this is a one-off.”